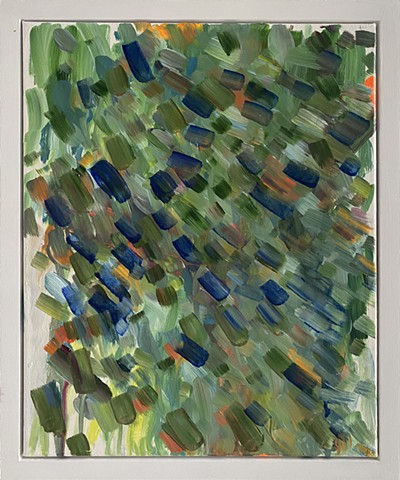 I am interested in how we accumulate, store and transmit information.

I think of my work as having a cartographic or graph like quality – being representations of information or misinformation about the natural and the sub natural world.

Each mark contains multiple meanings - from a living cell dividing and multiplying to a branch in evolution, from the mathematical ideal of ‘one’ (leaf, branch, cell) to the paradox that ‘one’ thing in nature can never really exist, all is interrelated and continually changing.

The world can appear chaotic because over time complexity increases.

Contempt, aggression, optimism, love, submission, awe, disapproval, remorse, each can arise in many forms and combinations in the tempestuous mind.

If each series of emotions that arise is acknowledged and accepted, clear unpredictable creativity emerges.

Not an escape from but an allowance for a state of interior immobility, an equilibrium of emotional forces allowing chaos and order to harmonize and generate together.

Materials leave traces on one part of the work and are combined into the physical surface of the other.

What is produced is a change in the quality of consciousness, the freedom to let go of being deliberate whilst continuing to perform prescribed actions.

Any ‘subject’ in the work therefore is recognized as the complex interaction of energy and information. ©Tim Furzer, 2019 Tim Furzer was born on the Isle of Jersey and studied architecture at the Bartlett School- University College London. He lives and works in NY. 'Circling Around Indeterminacy'

It may appear to be a paradox, but a paradox is simply two knowable things stretched apart. Not getting up or down but getting around to a state of production.

What you get isn't what you expect, unless you expect both everything and nothing.

Everything happens, if you think it's for a reason that's up to you. The best days are when you don't know what is going to happen- make those every day and things will get interesting.

The truth is precisely there.

The truth- is too false.

Truth is a dimension where we stop talking...

There's a ripple in the water, you can't see what made it. Just the ripple.

You don't see the grid until something passes behind it- a thing.

The works are not solutions but not problems either, like a visual form of question. All answers are equally right and wrong. Perseverance and self belief are not the same thing.

Did I come here to listen to the black birds? No. But that's what I did. So it became why I came here.

Trivial things are only such if they are treated trivially. Anything can be the opposite of trivial with the addition of time and attention.

Bad things come either side of good, otherwise they are indistinguishable. Warm follows cold, and back again, like weather. Then warm and cold come together.

During a struggle is when things change, but you can't try to struggle as much as you can't try for perfection, it's the trying that messes things up.

Perhaps it’s all a hallucination- until you realize it isn't. Be skeptically open to everything. Freeing your mind and finding your voice are connected (polar)- two aspects of the same occurrence.

Doing nothing with contentment, then doing everything that comes along or requires attention as if it were nothing, contentedly. Wake up to how far you've traveled, then forget it. It's not forgetting, it's choosing not to remember.